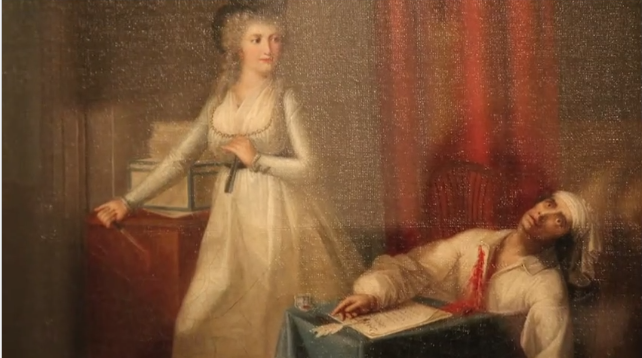 The film “Corday vs Marat” traces the events which go from the decision-making of Charlotte Corday in her hometown of Caen, to her murderous meeting with Jean-Paul Marat in Paris. This stories retraces the events in prison, the trial , and the death penalty. A process of confinement which associates and dedicates the two characters to the same destiny. To make this documentary, director Georges Guillot looked into of the means and reasons that led the young woman to perpetrate this assassination in the face of history.

The film also asks the question of the historical meaning of the event: how did Charlotte Corday pass over time from the status of assassin to that of victim, without affecting Jean-Paul Marat’s reputation. The director thus gives the floor to historians such as Olivier Coquart, Pierre Serna, Annie Duprat, Pascal Dupuy, Loris Chavanette, as well as the philosopher Michel Onfray and the writer Hélène Maurice-Kerymer. The film also brings with medical examiner Philippe Charlier a contemporary medical and psychoanalytic perspective on the criminal act of one of the most famous figures in history.