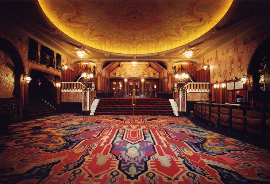 This Documentary series will take you on a trip around the world to discover the most wonderful and mythical Movie Theatres!

Each episode will take the viewer to a different city from Puerto Avenas far away in the southern coast in Tierra de Fuego where the first Movie theater of Latin America was born to Virginia in the US where one of the most sumptuous Cinema Palaces was built and still exists thanks to the love and support of the community!

This series tells the story of these mythical places from the moment they were inaugurated until today. Some of them saw the golden ages of cinema like the Lucerna Palace in Prague while others like The Porvenir saw the end of the indigenous communities in Tierra de Fuego and the birth of an Ethnographic Cinema about them. Each Place left an indelible mark in the history of each country, in the history of Cinema and in the memories of communities all over the world in Europe, Latin America, USA, Canada, Cuba and more…

A very high production value documentary produced for Canal + with beautiful settings around the world and archival footage of great quality that tells the stories and dreams inspired by some of the greatest mythical Movie Theatres in the World!