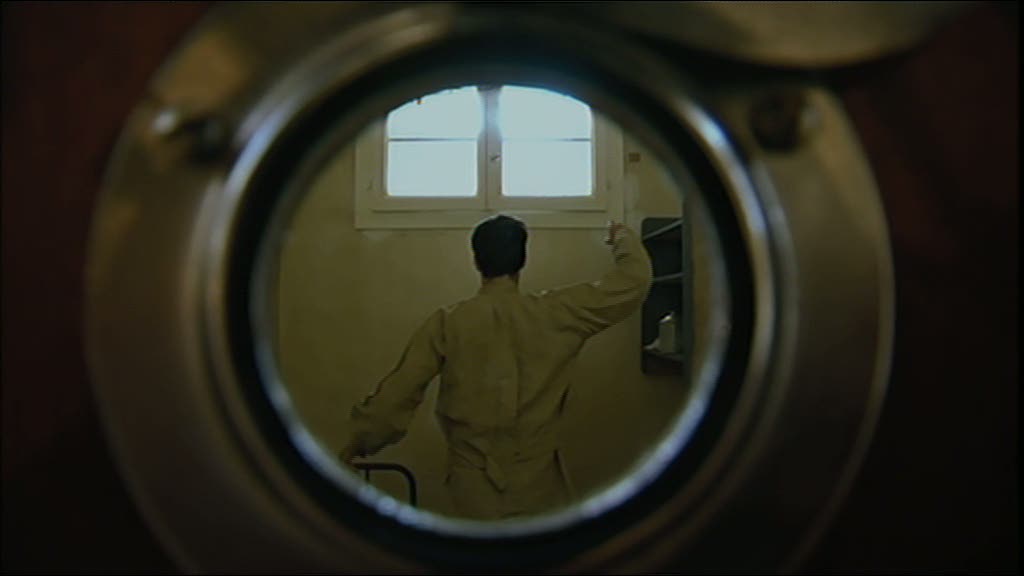 This film traces back the astonishing story of a robber and repeat offender with a many-sided personality: Benamar Siba, alias BB, has a huge police record. He’s a regular jail-goer. Then will come the time of redemption and media attention: Bénamar Siba becomes Barabbas. While he’s serving a sentence, he discovers theatre. His life takes a new turn. When he gets out of jail, he meets stage directors, and then writes a play telling the story of his own life. As his theatre career ris taking off, he relapses. Bénamar Siba allegedly served as a henchman for the Hornec clan, the famous “godfathers” of the Parisian milieu. Today, he is serving 4 and half years in prison. His case is now being examined for aggravated robbery. Next step, the Assize court in 2011 or 2012. So who is Benamar Siba ? Why and how did he fall into organized crime? What are his connections with the cream of the Parisian mob? Has Benamar Siba really tried to leave the past behind or should we consider him as an example of the famous saying « he that will steal an egg will steal an ox » ?

The Christmas truce is the most emblematic truce. Even warriors observe it; we all share the memory of the Christmas truce during the Great War… In the Bourrounet case, the truce is broken by the victim who does not want to celebrate Christmas Eve in family with his children and grandchildren because he hopes to have some good time with his ex. His daughter bears a little grudge against him… The son knows that for his father, who is a great womanizer, his own freedom comes before his family. For sure, Christmas Eve will be happy; Brice Bourrounet has invited his ex to drink some champagne and who knows maybe… the night will last until the next morning. When his ex arrives to the apartment, nobody answers. Alerted, she asks the landlady to open the door and to accompany her. This is the moment of horror for both women who find the 70-year-old lying in his bed all dressed with his face covered of bruises and wounds. The tails of a leather belt hang on each side of his neck. It seems like the victim has been strangled. Brice Bourrounet is a local personality. So what happened? Who killed Brice? And why?

Eps3: The Brigitte A. Case

Brigitte A choked her newborn baby and threw it in the trash. She was sentenced to five years in prison for voluntary manslaughter, without premeditation. It was the first time that the courts have showed so much mercy towards the defendant as psychiatrists have diagnosed a typical case for “denial of pregnancy”. As they are trying to rebuild their life today, Brigitte and Daniel have accepted to come forward to tell their story with heartfelt honesty. Filmmaker Marisa Cattini captures the powerful moment when Brigitte and Daniel come together to heal wounds that have haunted them for years.

This story begins in Paris, in the Marais district, at the « Avion Délices », a renowned pastry shop run by Christophe Belle and Xavier Philippe. Both men are associates. According to their friends they make the perfect partnership. Until the day Christophe Belle is found dead. Next to his dead body, the investigators discover a cocaine bag. The investigation finds that Belle wasn’t taking drugs and didn’t keep bad company. Rapidly the investigators take a closer look at his associate. Suspicion then starts weighing heavily on Xavier Philippe. Who is Xavier Philippe? His police record is even particularly heavy: car theft, unlawful possession of firearms, physical offense, hit-and-run. He has already spent a few years in jail. So is Xavier Philippe the devil in disguise? The murder squad hasn’t the faintest shadow of a doubt on the matter.

In 1957, in cell 18 of the Prison de la Santé, reserved to prisoners sentenced to death, a young man is enjoying his last weeks. He no longer expects any help from man’s society, and in his letters, his diary, he writes… His daily life, his revolts, his agony but also his Christian faith that he’s discovering and through which everything seems to make sense, his life, his death, his guilt…His name is Jacques Fesch; he made a sensation in the press in the 1950s, spurred by the debate on the death penalty, sentenced for the killing of a policeman in the middle of winter 1954! The (tabloid) press turned against this son from a good family who spent his youth in the cellar nightclubs of St Germain des Près, and he dragged his profound discontentment until he did something that can’t be undone… Forty years after his execution, on Christmas of 1993, when the cardinal Lustiger claims the wish of the French Catholic Church to beatify Jacques Fesch, he clearly intends to send a strong message to our society. It immediately stirs up controversy. The film is based on the comparison of these three periods of Jacques Fesch’s life (youth, prison, posthumous life) and it breaks the chronology of these periods to better reveal the complexity, the ambiguities of a character who always finds himself in the extreme. The documentary’s narrative aims at recreating this dimension of an impossible portrait where the rough edges are as many layers which tell a story and question the movement of a tumultuous life, and finally tell us what we are.

We have investigated on cases of serial rape. Because these cases best illustrate the transgression of that commandment. Desire a woman (or a man) is quite common… But what kind of madness does it take to be craving for rape and murder! This is the case with Jean-Paul Leconte. This predator has started by abusing an 8-year-old girl, and then he became worse and worse until he committed two murders. In the beginning, he acted unmasked, unconscious about the risks. Little by little, he understands that he must remove all evidence and disguise his murders. Experts who examined him diagnose an immature and dangerous personality. However, at first sight, Leconte is not a brute; he actually avoids the violence and aggressiveness of others, even of his cell mates. In prison he studied philosophy and he wrote outstanding papers to his judges. His problem is that he is unable to have a normal sex life, he is driven to force people and make them suffer.

At the Assize Court of Strasbourg, it is the first day for the trial of Jean-Louis Muller, a special case since this defendant is a forensic pathologist. Fifty-year-old Jean-Louis Muller is accused of killing his wife in November 1999. This man proclaims his innocence; he is convinced that on that evening, his wife committed suicide. Presumed innocent, Jean-Louis Muller appears before the court risking a maximum penalty of imprisonment for up to 25 years. The trial will last two weeks during which we followed him on a daily basis. Just like the court’s hearings, this film tackles the different issues addressed to the jury of the Assize Court. Did Brigitte, the ex-wife of Doctor Muller, want to commit suicide? Can the personality of the accused explain that he may have taken the plunge? Finally, how will the material evidence influence the jury? Throughout the documentary, Jean-Louis Muller and his team of lawyers explain in details the reasons for which he couldn’t possibly have shot his wife. This film follows the trial’s progress and it deals with its numerous developments. Until the very end, the suspense remains intense and everybody is impatient to hear the verdict.

They call him Igor but his real name is Marcel Strasuncki, 67 years old, with greying hair. Better known as the flamboyant artistic director of the « Pink Sweatsuit», a famous cabaret in Marseilles, he runs his company of dancers with an iron hand. But he is a disturbing man. He does not pay his dancers, he cuts off their families’ ties, controls their readings and their outings… all the dancers’ lives are under Igor’s control. A stranglehold that these former « disciples » interviewed in this film describe as sectarian. When the spotlights are turned off, the stage turns into a libertine dormitory. Igor advocates free love and the renunciation to jealousy , he forms and breaks up couples according to his will. In May 2009, Igor istands trial on charges of sexual assault and rape on minors and he is sentenced to 8 years in prison. According to testimonies, Igor allegedly used his full authority to satisfy his sexual needs and even on very young girls under the pretext of « energy exchange ». Has Igor crossed the red line as he was playing God? Has the company been manipulated by him ? Through the testimonies of former dancers, legal experts and Igor’s close relatives, this film tries to clear up this strange story based on sex, money and manipulation.

This story begins on November 5th 2004 in Cannes, on the French Mediterranean coast. Anthony Ashley-Cooper, a 66 year old man, somehow vanishes completely after speaking to his wife one last time. Lord Shaftesbury is later to be found… dead… as his body is only discovered on April 5th of the following year, in nearby rubbish dump in the town of Théoule-sur-mer. According to primary investigations, the nobleman had been strangled. Murder is then no longer a hypothesis…The investigation lead thereafter goes from one disclosure to another. One could say that reality is close to fiction here, as all of the elements in this story are usually to be found in the most captivating detective novels. This is the story of a rich and distinguished British aristocrat who has leaded a somewhat lewd life. His wife used to be an escort girl, and her brother has a taste for violence. Furthermore, the scene takes place in the French Riviera, a region with a large reputation for its passionate stories. Since the beginning of the investigation, the police have been interested in the personalities of the victim and his wife, Jamila M’Barek.

In 1999, Virginie Madeira, a 14-year-old schoolgirl accused her father Antonio, a 47-year-old mason, of having abused her since the age of six. At that moment, Virginie doesn’t realize all the consequences of this accusation, this lie as she calls it herself. The secret “revealed”, the judicial procedure is going to break the Madeira family despite of the denials of Virginie. In 2006 she publishes her book “I lied” in which she clearly explains that she invented all the charges against her father. This movie shows how this tragedy took place.